Due to environmental and economic benefits, reclaimed asphalt pavement (RAP) has now been routinely used in pavement construction.

There has been a request from the asphalt paving industry to increase RAP limits allowed in asphalt pavement mixtures to achieve an even greater economic benefit. According to the latest survey conducted by the National Asphalt Pavement Association (NAPA) and the Federal Highway Administration (FHWA), approximately 76.9 million tons of RAP were used in new asphalt pavement mixtures during the 2016 construction season, resulting in a cost savings of more than $2 billion compared to the use of virgin materials. The number of states reporting average RAP percentages of 20% or greater has increased significantly from 10 states in 2009 to 29 states in 2016. The national average percentage of RAP used in asphalt mixtures also has increased from 15.6% in 2009 to 20.5% in 2016, clearly indicating the trend of increasing RAP content used in asphalt mixtures.

However, in spite of the increased use of RAP, there is a still a lingering concern regarding the efficiency of RAP usage in asphalt mixtures, that is, how much aged asphalt binder in RAP is actually mobilized and blended into virgin asphalt binder to form a uniform binder blend and to coat new and RAP aggregate particles? Since RAP has experienced a lifetime of aging, RAP binder is very stiff and is hard to blend and mix with virgin binder. If RAP binder cannot be fully mobilized and made available for reuse as a binding material, there will be less effective asphalt binder than expected or designed to coat new and recycled aggregates and bind them together, resulting in premature distresses such as cracking, raveling and moisture damage. This will lead to a shortened service life of asphalt pavements or increased cost for pavement maintenance and repair, making it unrealistic to save money by using more RAP.

The University of Tennessee researchers have recently finished a research project sponsored by the Tennessee Department of Transportation aiming to solve the issue of RAP binder blending in recycled asphalt mixtures. They developed a laboratory procedure to determine the efficiency of RAP recycling during the plant mixing process. Since virgin and aged asphalt are both black and sticky, one cannot physically or visually differentiate between them once they are blended together. UT researchers used an advanced testing technique called gel permeation chromatography (GPC) to differentiate RAP binder from virgin binder. GPC separates asphalt molecules according to their sizes just like sieves do to aggregate particles in sieve analysis. RAP binders have more large molecules and fewer small molecules than virgin asphalt, which can be used to differentiate between virgin and RAP binders.

To validate the proposed method for determining blending efficiency of RAP binder, a laboratory mixing experiment was performed. Asphalt mixtures containing 10%, 20%, 30%, 40%, 50% and 80% RAP were fabricated in the laboratory at 165°C and two minutes of mixing time. To separate virgin aggregate after mixing to acquire the asphalt blend for GPC testing, some round-shaped aggregate particles were used as special aggregate so that they could be easily identified and separated from the mixture.

A preliminary study was conducted to determine the mobilization rates of three plant-prepared asphalt mixtures containing high percentages of RAP. All three mixtures contained 50% RAP and were produced in an asphalt plant in three different ways: hot mix, hot mix with a rejuvenator, and warm mix using a foaming technology. The rejuvenator content was 0.4% by weight of asphalt binder. During the production process, the rejuvenator was first added into the virgin binder. The mixing temperature was 145°C and 155°C for warm mix and hot mix, respectively. After production, the mixtures were stocked in a silo for another two hours. Figure 3 shows the mobilization rates of the three high RAP plant mixtures. It can be seen that all three mixtures showed a mobilization rate of over 80%. Rejuvenator and foaming technology appeared to have a positive impact of blending efficiency of RAP. The fact that plant mixtures had a much higher efficiency than laboratory-prepared mixtures is due to the silo storage during plant production, which significantly improved the diffusion between aged and virgin binder and helped form a homogeneous asphalt blend. 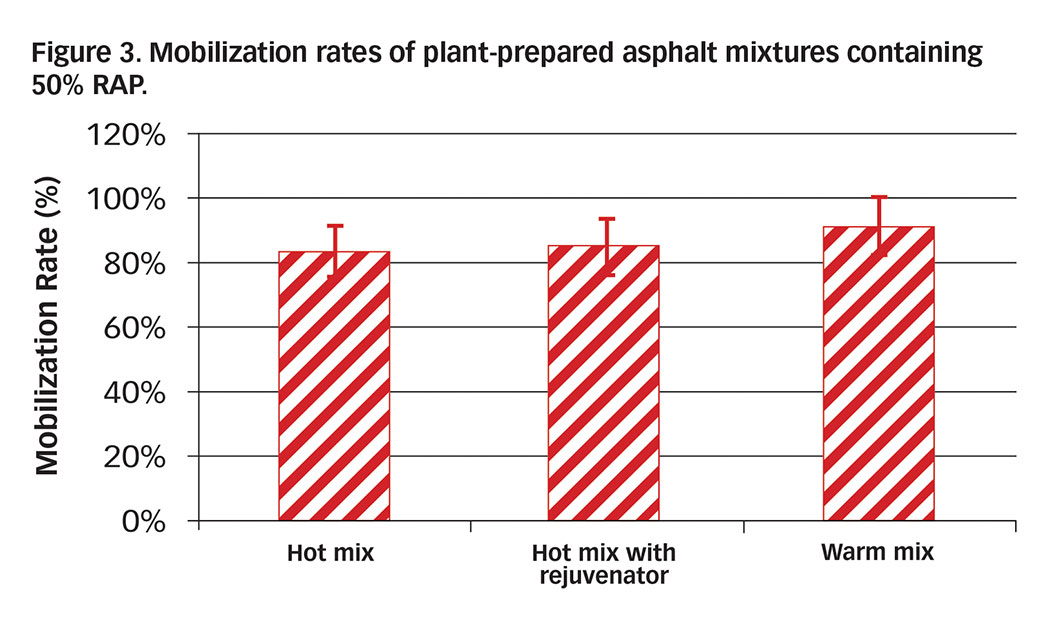 In summary, a laboratory procedure was proposed for determining the blending efficiency of asphalt mixtures containing RAP, which has the potential to solve the problem of blending efficiency of high RAP contents in asphalt mixtures. The preliminary blending results seem promising, indicating that total blending is possible even for high RAP mixtures. However, more comprehensive future studies are still needed to consider various materials and mixing conditions, and to verify the current findings under these circumstances. The detailed laboratory procedure for testing blending efficiency can be found in doi: 10.3141/2506-08.

This website uses cookies to improve your experience while you navigate through the website. Out of these, the cookies that are categorized as necessary are stored on your browser as they are essential for the working of basic functionalities of the website. We also use third-party cookies that help us analyze and understand how you use this website. These cookies will be stored in your browser only with your consent. You also have the option to opt-out of these cookies. But opting out of some of these cookies may affect your browsing experience.
Necessary Siempre activado
Necessary cookies are absolutely essential for the website to function properly. This category only includes cookies that ensures basic functionalities and security features of the website. These cookies do not store any personal information.
Non-necessary
Any cookies that may not be particularly necessary for the website to function and is used specifically to collect user personal data via analytics, ads, other embedded contents are termed as non-necessary cookies. It is mandatory to procure user consent prior to running these cookies on your website.
GUARDAR Y ACEPTAR